When & How Long Does Lavender Bloom?

Lavender is a popular, versatile plant that can make a stunning addition to your garden. However, you may be wondering when and how long it blooms.

Most varieties of lavender bloom in early spring to early summer. Blooming periods vary from 3-4 weeks to year-round. When and how long lavender blooms depends on the variety of lavender plant and the climate conditions.

This article will cover the different lavender varieties, including when they bloom and how long they bloom for. I’ll also discuss their favorite climates and important characteristics and if it’s possible for lavender to grow year-round.

There are 400 varieties of lavender, and all of them can be grouped into three main groups, which are:

The Non-English lavender variety refers most commonly to two variants: French and Spanish lavender. Each variety and its variants have different bloom times and blooming periods.

Aside from the variety, bloom time is also highly dependent on the lavender’s location. A lavender that blooms at one time in one place may bloom at a completely different time in another.

Here’s a table summarizing when and how long each Lavender variety blooms:

English lavender, also known as true or common lavender, blooms in late spring to mid-summer, in May, June, or July and will last for 3-4 weeks. In some cases, it may also bloom as late as August.

It’ll often produce a second bloom in late summer, randomly after the first. This is more likely if the flower spikes are harvested quickly.

English lavender has a very light, sweet fragrance. It has less camphor than other varieties (only up to 0.6%), so it lacks its woody, pungent scent. Today, it’s the variety that’s used most commonly in aromatherapy practices.

English lavender is considered the hardiest variety of lavender and can live up to 15 years with the proper care and conditions. It’s also the most cold-hardy and can tolerate temperatures ranging from -20 to 10°F (-28.89 to -12.22°C). It can survive snow, frost, and ice, though it does best in cool to warm climates with mild winters.

It’s hardiest in the U.S. Department of Agriculture plant zones 5 through 8. If you’re not sure what zone your home is in, you can find out here.

French lavender typically blooms in early spring, as early as March, and will continue blooming until fall, or the first frosts, as long as the weather is warm enough. It has a particularly long flowering season, blooming almost all year round if the conditions are right.

It is generally less fragrant than other varieties. It has tiny serrations in its leaves or toothed (detente) leaves, which has earned it the nickname ‘fringed lavender.’

Most French lavender varieties are hardy in USDA zones 8 and 9. It grows best in hot climates with mild winters. This variety isn’t cold-hardy and will die if exposed to frost, snow, ice, and freezing temperatures. It can’t withstand temperatures lower than 10°F (-12.22°C).

Spanish Lavender generally blooms in mid-spring and continues to bloom sporadically until late summer, from as early as March to as late as June. In milder climates, it’ll begin blooming in early spring during May.

Though it’s called Spanish lavender, Lavandula stoechas is actually from the Mediterranean. It’s also known as French lavender (in the UK) or butterfly lavender. It’s less hardy than other varieties and considered to be quite fragile.

It has a short flower spike and open petals at the top, resembling ears. These ears help to distinguish it from other varieties. Its leaves are silvery grey and aromatic, with blooms ranging from white to blue to purple.

Like French lavender, Spanish lavender is hardy to zones 8-9 with hot and humid summer weather. It does best in climates with mild winters and cannot withstand freezing conditions.

This variety is a cross between Lavandula angustifolia and Lavandula latifolia. It tends to bloom later than other lavender species – around one month later than English varieties.

It typically blooms in June or July. In contrast to many other varieties, blooms only once, with blooms lasting up to 2 months, usually until September.

Though it blooms only once, lavandin tends to bear larger and higher amounts of flowers at one time than other varieties. Its flowers also have a higher camphor content than the common English varieties.

Because it has a high amount of fragrant, aromatic oil, it’s popularly used in perfume, cosmetics, aromatherapy, and cleaning products. However, this oil is seen as inferior in quality to English lavender.

It’s less cold hardy than common English Lavender but better tolerates hot and dry weather. It does best in zone 5.

Lavender can grow year-round if conditions are favorable. In warmer regions, lavender will stay green throughout the year. It’s also perennial, meaning it can live for many growing seasons.

Lavender grows best in hot, sunny climates with low humidity. In regions with cold winter or fall seasons, most lavender will die back when the temperatures fall, unless they’re hardy to the zone they’re in.

It’s also possible to have lavender blooms throughout the whole growing season, from early spring to late summer, if you plant different varieties in your garden. You can also check out this list of continuously blooming lavender varieties for options that will bloom in your garden all year long.

Specific varieties of lavender bloom at different times. However, in general, lavender blooms in late spring and early summer. Some varieties also bloom multiple times during the season.

How long lavender will bloom for varies depending on its variety and climate conditions. Lavender can grow year-round in certain regions if the conditions are favorable (i.e. it gets enough sun and there aren’t any major issues). 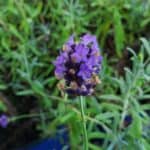 Why Your Lavender Isn’t Blooming: 9 Reasons Why & the Solutions

If you’re thinking about starting a herb garden, rosemary is an excellent plant to start with. It is versatile and hardy, and it tastes delicious! But, what should you plant with rosemary? A good companion will work with rosemary to ensure the overall health of both plants.  To learn more about the best and worst…

Thyme Companion Plants – What To Grow With Thyme

If you’re looking for a hardy and versatile herb to kickstart your herb garden, thyme is an excellent choice. Not only is it easy to grow, but it also comes with a huge range of benefits that will help your whole garden thrive.  To learn more about thyme, and its best companion plants, take a…

10 Of The Best Herbs For Growing In Hydroponics

If you have never had the pleasure of harvesting your own herbs to season your homemade dishes, you have not lived. They are one of the most rewarding plants to grow. Not only do they look beautiful, but they are also edible and we all love a plant that is both beautiful and useful. Best…